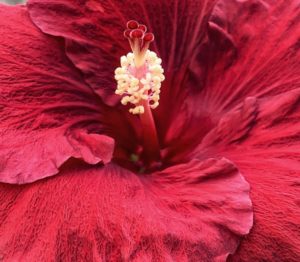 Hibiscus are members of the mallow family (Malvaceae). They share the following morphological features: herbaceous plants, shrubs to small trees; leaves alternate, simple, lobed or palmate; flowers solitary, axillary, with 5 distinct petals, convolute in bud; stamens numerous; filaments fused into a column; pistil 1, style 1 apically branched into 5 stigmas; and fruit a capsule with 5 locules. The mallow family historically shared a close morphological relationship with Bombacaceae, Sterculiaceae and Tiliaceae. With the advent of recent DNA analysis, these three families have been lumped into the mallow family.

About 420 species are assigned to the genus Hibiscus. Their range is: United States to South America, Africa, Saudi Arabia, southern Europe, Asia Minor, south Asia and Australia. Linnaeus’ description of Hibiscus rosa-sinensis was the first species in the genus. The plant he described bore double rose-red flowers. Also common at the time were crimson, yellow, buff and white double-flowered forms. Ornamental hibiscus, as we know them today, were cultivated in English greenhouses in the 18th Century (always in hot houses). Interestingly, the Botanical Register noted in 1836 that double-flowered forms were most common in early cultivation and singles were uncommon. Fortunately, hibiscus ultimately found a niche in Hawaii where they thrive outdoors.

Ornamental hibiscus as we know them today are the result of hybridization done in several parts of the world, including India, Australia, South Africa and beyond. Hibiscus breeding achieved its greatest impact in Hawaii beginning at the turn of the 20th Century. Breeding programs in Florida, Louisiana and California led to formation of the American Hibiscus Society in 1951. Subsequently, Florida became a significant contributor of new hybrids after formation of the AHS. 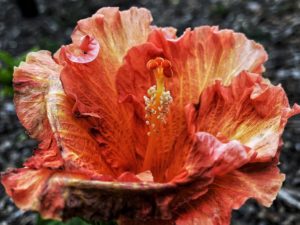 Hybrids produced in Hawaii and Florida generally don’t perform well in Southern California. Our hot summers with low humidity and zero rainfall are the antithesis for these plants. Additionally, winter temperatures near freezing can harm vegetative growth and soil temperatures below 60oF are not conducive to healthy roots.

Locally, Ross H. Gast embarked on a 10-year breeding program sponsored in part by the Arboretum. Known as the “Hibiscus Project,” it was begun privately in 1946 and moved to the Arboretum in about 1958. He used H. liliiflorus (Mauritius), H. denisonii (unknown origin), and whites H. arnottianus (Hawaii), H. punaluuensis (Hawaii) and H. arnottianus subsp. immaculatus (Hawaii). 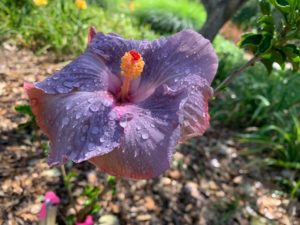 Current breeding goals at Texas A&M University include novel flower colors and shapes, dwarf plant growth habit, colorful foliage (purple has been achieved) and extended flowering season. A universal goal among hibiscus enthusiasts is a blue flower. Other goals include tropical Hibiscus flowers lasting longer than 1 day, flowers that change color from one day to the next, plants with a weeping or prostrate growth habit, and tropical hibiscus with increased tolerance to cold.

Twelve varieties remain in the collection from earlier years of the Arboretum. Three were promoted in 1968 through the Arboretum’s plant introduction program: ‘Dr. Stewart’, ‘Lasca Beauty’ and ‘Myella’. Only ‘Dr. Stewart’ and ‘Myella” remain in the living collection. In May 2020, we added 53 cultivars, most of which have not been grown previously at the Arboretum. Flowers range from single color to multi-color, changing color from day to day, small to huge, ruffled petal edges, overlapping petals or not, and flat or reflexed petals. They were planted in 4 groupings on Tallac Knoll, one near the Plumeria Grove and three near the large sycamore fig by the Aquatic Gardens. Flowers continue to be limited while the plants establish root systems.

Ideal growing conditions for ornamental hibiscus include high humidity, warm nights and warm soil temperatures year ‘round—conditions difficult to find in Southern California. Look for the warmest site on your property that is not subject to frost. Hibiscus are heavy feeders— consider monthly applications of 4-8-8. Water moderately in spring and fall, and generously in summer Little water should be given in winter to establish a dormant period and protect the roots from rotting. Soil pH preference is 5.5 or 6.0. Well drained soil will aid root health during our winters, especially if they are wet. Hard pruning should be done in late winter or early spring, when growth begins to flush. Light pruning can be done at any season. The best time to plant is April or May to allow a full growing season for establishment of a healthy root system.

Many economic uses can be found for species of Hibiscus. Several have ornamental applications, much like H. rosa-sinensis. Roselle (Hibiscus sabdariffa) calices can be steeped to make a tea that is reported to be full of antioxidants and can lower blood pressure. Hibiscus tea has been used by many cultures to lower body temperature, treat heart and nerve diseases, and as a diuretic to increase urine production. Tea was used to treat constipation, cancer, liver disease, and cold symptoms in Africa. Kenaf paper is made from the stem fibers of H. cannabinus, a species very similar to roselle. This fiber plant is fast growing and could reduce dependency on wood pulp for paper.

Ornamental hibiscus (H. rosa-sinensis) have a complex genetic composition through the efforts of many people around the world. With nearly 20,000 cultivars, the diversity of flower color, patterns and shapes is breathtaking. The Arboretum has a long history with this beautiful plant and introduced three cultivars to the horticultural industry. The newly planted hibiscus collection serves to enhance the existing beauty of Tallac Knoll.

James E. Henrich is Curator of Living Collections at the Arboretum.