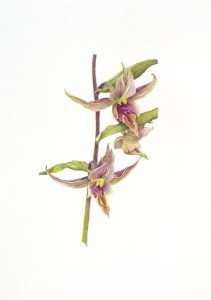 Botanical Art classes have been going on at the Arboretum for twenty years. The courses were started and taught for many years by renowned botanical artist Olga Eysymontt, who was instrumental in the founding of the Botanical Artists Guild of Southern California. For the last six years the instructor is Cristina Baltayian, who herself is a former student of Olga.  The classes are held at the Arboretum every Tuesday, and follows the traditional botanical art techniques of observing, sketching and portraying plants in a realistic manner.  Botanical illustration began hundreds of years ago as a scientific tool for identifying and studying plants. In the 19th century, it began to be recognized as an art form in itself, and artists have drawn and painted the plant world in all its exquisite forms ever since.  In this exhibit we are showcasing some of the wonderful art that students of the class have been working on in the past 2 years. Each has its own style, expression and personality, and that’s one of the many things that are so satisfying about working with Nature in its infinite variety.