The group uses the Shared Inquiry™ method developed by the Great Books Foundation.  The chosen book of the month must be read in order to participate.

New members are always welcome!  To check out the history of the book club hover on the tab and see all the previous years and books to explore.

For more information about the Book Group, please contact, Arboretum Librarian, Susan Eubank, at 626-821-3213 or Susan.Eubank@Arboretum.org.  Please RSVP to Susan if you plan to attend. 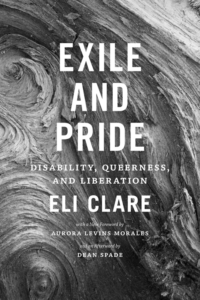 “This set of nine interconnected essays defies categorization in its exploration not only of queerness and disability but also of class, race, urban-rural divides, gender identity, sexual abuse, environmental destruction and the meaning of home. Place–and displacement–…Clare goes into detail about the realities of life in a small logging town, about the economics of clear-cutting forests and over-fishing salmon, about the destructive ideology of infinitely renewable resources that was taught to her as a child, the equally untenable romanticism of urban environmental activists, and the gains and losses that come with finding refuge in urban queer communities. These are not digressions. They are, as Clare puts it, ‘the connective tissue that brings the words queer, class, and exile together.’”– Rachel Rosenbloom, The Women’s Review of Books

First published in 1999, the groundbreaking Exile and Pride is essential to the history and future of disability politics. Eli Clare’s revelatory writing about his experiences as a white disabled genderqueer activist/writer established him as one of the leading writers on the intersections of queerness and disability and permanently changed the landscape of disability politics and queer liberation. With a poet’s devotion to truth and an activist’s demand for justice, Clare deftly unspools the multiple histories from which our ever-evolving sense of self unfolds. His essays weave together memoir, history, and political thinking to explore meanings and experiences of home: home as place, community, bodies, identity, and activism. Here readers will find an intersectional framework for understanding how we actually live with the daily hydraulics of oppression, power, and resistance. At the root of Clare’s exploration of environmental destruction and capitalism, sexuality and institutional violence, gender and the body politic, is a call for social justice movements that are truly accessible to everyone. With heart and hammer, Exile and Pride pries open a window onto a world where our whole selves, in all their complexity, can be realized, loved, and embraced.

ISBN: 9780151002634
“The [book] is delightful, original, moving and entirely persuasive in its shifts from sybaritic Los Angeles to the clenched world of a fraught family in Alliance, Nebraska in the dead of winter. In this sense, the novel is sternly within the American literary tradition, with the country itself as the significant backdrop directing lives and events. But Ann Patchett’s touch is feather-light, as deft as the magician’s repertoire which enlivens the narrative, so that the crucial determining factors of place and opportunity are simply there as contrasting climates behind the action.”— Penelope Lively, Independent
A secretive magician’s death becomes the catalyst for his partner’s journey of self-discovery in this “enchanting” book (San Francisco Chronicle) “that is something of a magic trick in itself-a 1990s love story with the grace and charm of a nineteenth-century novel” (Newsweek).

“Three themes braid like a river’s channels through Daniel’s account of 134 days at Dutch Henry Homestead, …in the Klamath Mountains of Southern Oregon. He writes of the place, and the creative ebb and flow of his work there. He writes of his father, labor organizer Franz Daniel. And, shadowed always by Franz’s presence, he writes of his own coming-of-age in the 1960s…When Daniel writes that today’s Rogue River, with its dwindling salmon and uneven water quality, … one sees a nuanced grasp of the natural world shaped by the challenging currents of his childhood… This honest, satisfying memoir is a fine gift from a writer whose ghosts accepted his invitation to the madrone-shaded homestead above the Rogue.” Edward C. Wolf, The Oregonian

In November of 2000, after the Presidential election but before the final results were determined, John Daniel climbed into his pickup, drove to a cabin in the Red River Gorge, and quit civilization. The strictures were severe. No two-way human communications no radio, no music, no clocks or calendars, not even his cat. He would leave his wife behind and put himself into a cabin sure to be snowed-in just after his arrival, and he would live in complete isolation until spring. He was intent on not hearing a human voice other than his own for the next six months. Thoreau is never far away from ideas like these, and Thoreau’s Journals had provided both instruction and inspiration. For in addition to the physical rigor of living in isolation, John Daniel intended to do spiritual work while living alone. A writer living alone is bound to write. And that he did. The result,The Rogue River Journal, is a remarkable memoir. 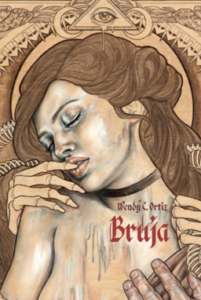 “It’s … a “dreamoir,” which Ortiz defines as: “A literary adventure through the boundaries of memoir, where the self is viewed from a position anchored into the deepest recesses of the mind.” Though “Bruja” is not a traditionally plotted literary work, it contains themes and symbols — we are, after all, dwelling in a person’s subconscious. Maternal conflict, pregnancy and indecision over relationships and living arrangements recur. As do bags (the packing and unpacking of them); water, sometimes containing sharks and dolphins; and cats. “Bruja” stirs the instinct to draw these threads together…The dreams tantalize, and in this way mirror the most pervasive form of life writing the world has ever seen: social media — another medium in which Ortiz is adept.”— Ellie Robbins, Los Angeles Times

“In Bruja, Wendy C. Ortiz deftly navigates the land of dreams in what she calls a dreamoir. By telling us her dreams, by revealing her most unguarded and vulnerable self, Ortiz is, truly, offering readers the most intimate parts of herself–how she loves, how she wants, how she lives, who she is. Bruja is not just a book–it is an enigma and a wonder and utterly entrancing.” –Roxane Gay, author of Bad Feminist 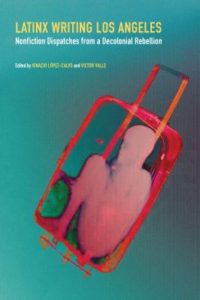 “The [editors] are interested in the global city as the place where the Other goes to escape economic disaster zones caused by neoliberalism. Comprising two introductory essays and 16 nonfiction selections by Latinx authors writing from and about Los Angeles, this anthology attempts to break the Latinx canon as it has been envisioned (strictly literary) and made to fit into a mainstream mold, and it calls for the inclusion of nonfictional and cross-genre works…The selections–which span from the 18th century to the present and are a combination of previously unpublished work or writing not deemed literary–include cronicas, testimonios, memoirs, and letters from both well-known and obscure writers. A vital addition to Latinx studies.”— Y. Fuentes Choice

Latinx Writing Los Angeles offers a critical anthology of Los Angeles’s most significant English-language and Spanish-language (in translation) nonfiction writing from the city’s inception to the present. Contemporary Latinx authors, including three Pulitzer Prize winners and writers such as Harry Gamboa Jr., Guillermo Gómez-Peña, and Rubén Martínez, focus on the ways in which Latinx Los Angeles’s nonfiction narratives record the progressive racialization and subalternization of Latinxs in the southwestern United States. While notions of racial memory, coloniality, biopolitics, internal colonialism, cultural assimilation, Mexican or pan-Latinx cultural nationalism, and transnationalism permeate this anthology, contributors advocate the idea of a contested modernity that refuses to accept mainstream cultural impositions, proposing instead alternative ways of knowing and understanding. Featuring a wide variety of voices as well as a diversity of subgenres, this collection is the first to illuminate divergent, hybrid Latinx histories and cultures. Redefining Los Angeles’s literary history and providing a new model for English, Spanish, and Latinx studies, Latinx Writing Los Angeles is an essential contribution to southwestern and borderland studies. 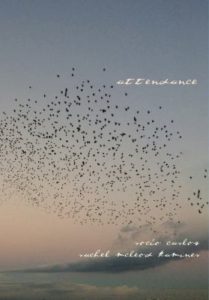 “This collaborative work is documentary poetry at its finest. The opening note explains … Attendance, “was born from Rocio’s description of going outside every morning to check on everything that grows in her backyard. Together we decided that one of us would attend to the flora and one of us would attend to the fauna…” The work comes in at over 200 pages mixing poems with reflections on natural locations like La Tuna Canyon, Altadena, the Bolsa Chica Wetlands, Echo Park Lake to dozens of other sites. In addition to geographic musings, there are words on hawks, ravens, species of trees, their families and politics. This is truly a unique book. — Mike Sonksen, KCET

Reading Attendance trains your attention on plants and animals until you can’t stop noticing them. It’s a way of moving through the natural world–which turns out to include the whole world. An almanac, a logbook, a devotional, a witness statement, poetry. A documentary not in the sense of capturing but in the sense of being a creature paying attention to the world we already live in. It’s a hybrid text: One year of two people reaching their arms across styles and genres. At times notes, at times lists, or run-on sentences, or poems, or things that want to be poems, but always plants, and always animals. The words are offered up with no correction or with the revision exposed. This is writing that includes where it comes from or writing that painfully doesn’t become. We hold so many questions about love and attention and violence.

“Attendance is a meditation, an ushering-in of the kind of mindfulness that life deserves. One that leaves readers like me nodding and saying yes to lines like these: ‘Just try to want different things’ and ‘You can do anything you want with me as long as you do it slowly first.’ Carlos and Kaminer are power, and this book is plain gorgeous.”–Natashia Deón

“I expected to be moved by this collaborative work from Rachel McLeod Kaminer and Rocío Carlos–they are two distinct and beautiful poets after all. But what I didn’t expect from Attendance is the way it brought the life around me to life. How the birds and the trees and the landscape began to move in ways I hadn’t noticed before, how my skin began to feel enveloped by the details of the day. Great art has always made me know that I belonged in the world, that I wasn’t wandering through it alone. And Attendance, as much as any recent book, has reminded me of this truth.”–Chiwan Choi