The group uses the Shared Inquiry™ method developed by the Great Books Foundation.  The chosen book of the month must be read in order to participate.

New members are always welcome!  Click here to see the questions already asked for this year’s past books and check out the history of the book club by hovering on the tab and see all the previous years and books to explore.

COVID-19 Response: This group has decided to move the book club to Zoom for the immediate future. Please be sure to RSVP to Susan.Eubank@Arboretum.org if you would like to participate in a specific meeting.  You will be sent the Zoom link for that meeting.

For more information and to be added to the e-mail reminder list about the Book Group, please contact, Arboretum Librarian, Susan Eubank, at 626-821-3213 or Susan.Eubank@Arboretum.org.  Please be sure to RSVP to Susan if you plan to attend. 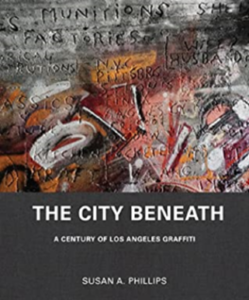 The City Beneath: A Century of Los Angeles Graffiti by Susan A. Phillips. New Haven; London: Yale University Press [2019].

“Susan A. Phillips’s wonderfully researched book is truly unique in the study of graffiti. Not only has she examined the cultural origins of mark-making, but she also re-defines the geographical narrative, stealing the crown from New York and placing it on the head of the West Coast as the cultural epicenter of the birth of American graffiti.”—Aaron Rose, author of Beautiful Losers.

A sweeping history of Los Angeles told through the lens of the many marginalized groups–from hobos to taggers–that have used the city’s walls as a channel for communication. Graffiti written in storm drain tunnels, on neighborhood walls, and under bridges tells an underground and, until now, untold history of Los Angeles. Drawing on extensive research within the city’s urban landscape, Susan A. Phillips traces the hidden language of marginalized groups over the past century–from the early twentieth-century markings of hobos, soldiers, and Japanese internees to the later inscriptions of surfers, cholos, and punks. Whether describing daredevil kids, bored workers, or clandestine lovers, Phillips profiles the experiences of people who remain underrepresented in conventional histories, revealing the powerful role of graffiti as a venue for cultural expression. Graffiti aficionados might be surprised to learn that the earliest documented graffiti bubble letters appear not in 1970s New York but in 1920s Los Angeles. Or that the negative letterforms first carved at the turn of the century are still spray painted on walls today. With discussions of characters like Leon Ray Livingston (a.k.a. “A-No. 1”), credited with consolidating the entire system of hobo communication in the 1910s, and Kathy Zuckerman, better known as the surf icon “Gidget,” this lavishly illustrated book tells stories of small moments that collectively build into broad statements about power, memory, landscape, and history itself. 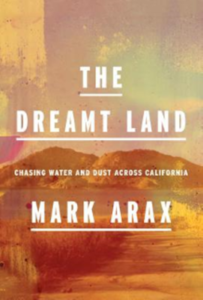 “Traveling ‘from one end of California to the other, from drought to flood to wildfire to mudslide,’ he chronicles in absorbing detail the transformation of the state’s Central Valley from modest seasonal farms to huge agribusinesses exporting pistachios, almonds, mandarins, and pomegranates. Drawing on historical sources and nearly 300 interviews, Arax reveals the consequences to land and wildlife of generations of landowners who have defiantly dug, dammed, and diverted California’s waters. .”—Kirkus Reviews

A vivid, searching journey into California’s capture of water and soil–the epic story of a people’s defiance of nature and the wonders, and ruin, it has wrought. Mark Arax is from a family of Central Valley farmers, a writer with deep ties to the land who has watched the battles over water intensify even as California lurches from drought to flood and back again. In The Dreamt Land, he travels the state to explore the one-of-a-kind distribution system, built in the 1940s, ’50s and ’60s, that is straining to keep up with California’s relentless growth. The Dreamt Land weaves reportage, history and memoir to confront the “Golden State” myth in riveting fashion. No other chronicler of the West has so deeply delved into the empires of agriculture that drink so much of the water. The nation’s biggest farmers–the nut king, grape king and citrus queen–tell their story here for the first time. Arax, the native son, is persistent and tough as he treks from desert to delta, mountain to valley. What he finds is hard earned, awe-inspiring, tragic and revelatory. In the end, his compassion for the land becomes an elegy to the dream that created California and now threatens to undo it. 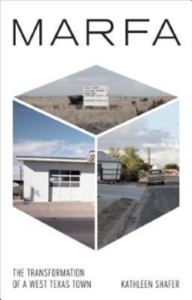 Marfa: The Transformation of a West Texas Town by Kathleen Shafer, Austin, University of Texas Press, 2017.

“To people (including me) who have visited, Marfa is magical. At its center is [Donald] Judd’s work, much of it created as site-specific installations there. Kathleen Shafer tells Judd’s story, and constellating stories about art, history, landscape, weather, the mysterious Marfa lights, economics, sociology and, of course, real estate. Her book is an absorbing analysis of, and a love letter to, a community she has visited for the past six years. In mostly serviceable… prose, she tells how Marfa … became a “brand” as well as a mecca for art lovers.—Willard Spiegelman Wall Street Journal

A small town in the vast desert of West Texas, Marfa attracts visitors from around the world to its art foundations and galleries, film and music festivals, and design and architecture symposiums. While newcomers sometimes see it as “another Santa Fe,” long-time residents often take a bemused, even disapproving attitude toward the changes that Marfa has undergone since artist Donald Judd came to town in the 1970s and began creating spaces for his own and other artists’ work. They remember when ranching and the military formed the basis of the town’s economy, even as they acknowledge that tourist dollars are now essential to Marfa’s sustainability. Marfa tells an engaging story of how this isolated place became a beacon in the art world, like the famous Marfa Lights that draw curious spectators into the West Texas night. As Kathleen Shafer delves into the town’s early history, the impact of Donald Judd, the expansion of arts programming, and the increase in tourism, she unlocks the complex interplay between the particularities of the place, the forces of commerce and growth, the textures of local culture and tradition, and the transformative role of artists and creative work. Bookending her story between two iconic artworks-the whimsical Prada Marfa and the crass Playboy Marfa, Shafer illuminates the shifting cultural landscape of Marfa, showing why this place has become a mecca for so many and how the influx of newcomers has transformed its character.

“Alfredo Véa Jr. has written such a terrific novel about the poor, the disenfranchised & the forgotten that it doesn’t make you feel pity at all…It’s beautifully written; it’s thematically vital for our times. It addresses questions larger than the mundane world we usually live in. Véa writes about human diversity beautifully, making light of stereotypes, turning them over in his hands as if they were curious pebbles. If you have a community with 20 races … then not to give each race its proper due would be worse than being racist…Véa doesn’t romanticize poverty. But he allows his fictional grandpa to point out that having yourself & the horizon is more than enough for any human being.”—Carolyn See, Los Angeles Times

“Buckeye Road wasn’t much of a town, just a place where a pocked and pitted road met an invisible street….It was less that unincorporated, it was unknown…” Yet it is here in the desert outside the Phoenix city limits that Alfredo Véa, Jr., finds a world of marvels spilling out of the adobe homes, tar-paper shacks, rusted Cadillacs, and battered trailers that are otherwise known as “Buckeye.” Three thousand years of history and the myths of many cultures, as well as the fates of a dozen unforgettable characters, will all collide one hot summer in 1958; and the events played out on Buckeye Road will amount to nothing less than a new and life-affirming vision of the American Southwest…and of America itself. The vivid symbol of Buckeye Road is La Maravilla–the blanket of marigolds laid upon graves in Mexican cemeteries, and the mythical dog, sacred to the Aztecs, who returns from the under-world to lead his master to Mictlan, the land of the dead. La Maravilla is the embodiment of belonging to two worlds, and of being torn between the love and fear of both. It is the condition and mystery borne by all who inhabit this American outback–whether they are Blacks, Chicanos, Asians, Native Americans, Mexicans, European immigrants, or Anglo misfits. For Beto, the young boy at the center of this magnificent story, it is the dilemma that he must somehow resolve and emerge from whole. For Beto has no parents to guide him–his mother has fled the “old ways” of her Mexican family for a bright new American life beyond the desert sunset in California, where “Indians are history and Sunday is for football, not church!” But in her place, and more than filling it, is Beto’s aristocratic Spanish grandmother, a Catholic curandera with a passion for the music of Duke Ellington. He also has his grandfather, a Yaqui Indian whose spirit soars above a desert without frontiers. With this extraordinary first novel, Alfredo Véa, Jr., takes his place in the first rank of American writers. 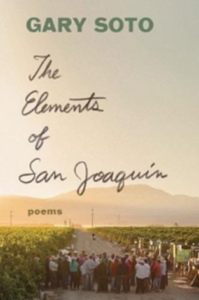 “The book was first published in 1976…Chronicle Books reissued a new and selected edition … Here a man in his sixties revisits his childhood and the early poetics that put him on the map as a pioneer in Chicano poetry. …Careful brushstrokes… refresh the original book that describes both the hardships and joys of growing up in the central valley….The poet has an impeccable memory for capturing the music and sounds of his childhood. The language of the poems remains rich and timeless in phrases such as the days shut like a suitcase, plastic bags that ghost in the wind, and tomatoes hanging/Like small red globes.—Melinda Palacio, La Bloga

A timely new edition of a pioneering work in Latino literature, National Book Award nominee Gary Soto’s first collection (originally published in 1977) draws on California’s fertile San Joaquin Valley, the people, the place, and the hard agricultural work done there by immigrants. In these poems, joy and anger, violence and hope are placed in both the metaphorical and very real circumstances of the Valley. Rooted in personal experiences–of the poet as a young man, his friends, family, and neighbors–the poems are spare but expansive, with Soto’s voice as important as ever. This welcome new edition has been expanded with a crucial selection of complementary poems (some previously unpublished) and a new introduction by the author.