The Arboretum Library’s book group explores the portrayal of western North American landscape in fiction, non-fiction, drama, and poetry, letters, graphic novels, etc.  The group generally, but not always, meets the last Wednesday of the month in the Arboretum Library or out on the Arboretum grounds, pandemic, weather and sunlight permitting. When the weather is good and disease rates are low, the group will meet outside in appropriate places in the gloriously, beautiful grounds of the Los Angeles County Arboretum and Botanic Garden with appropriate social distancing and masking. The group leader will decide each month whether the meeting will be in-person or on Zoom.

The group uses a modified version of the Shared Inquiry™ method developed by the Great Books Foundation.  The discussion is greatly enhanced if the chosen book of the month is read, although we welcome those who just want to listen. Let the host know you only want to listen. New participants are always welcome!

Click here to see the questions already asked for this year’s past books and check out the history of the book club by hovering on the tab and see all the previous years and books to explore.

For more information and to be added to the e-mail reminder list about the Community Book Discussion Group, please contact, Arboretum Librarian Emeritus, Susan Eubank, at Susan.Eubank@Arboretum.org.  You must RSVP to Susan for the discussions you would like to attend.

Barry Lopez asked 45 poets and writers to define terms that describe America’s land and water forms — phrases like flatiron, bayou, monadnock, kiss tank, meander bar, and everglade. The result is a major enterprise comprising over 850 descriptions, 100 line drawings, and 70 quotations from works by Willa Cather, Truman Capote, John Updike, Cormac McCarthy, and others. Carefully researched and exquisitely written by talents such as Barbara Kingsolver, Lan Samantha Chang, Robert Hass, Terry Tempest Williams, Jon Krakauer, Gretel Ehrlich, Luis Alberto Urrea, Antonya Nelson, Charles Frazier, Linda Hogan, and Bill McKibben,Home Ground is a striking composite portrait of the landscape. At the heart of this expansive work is a community of writers in service to their country, emphasizing a language that suggests the vastness and mystery that lie beyond our everyday words.

“[The book is] a glossary of terms used to describe the landscape of North America… ‘but the writers’ intent was not to be exhaustive, let alone definitive.’ [Introduction] Instead, the aim was, in the windswept language of landscape writing, to name ‘the things we’ve picked out on the land,’ names we’ve held on to ‘to make ourselves abiding and real.’…Literature, or something like it, hovers over the project like an impending storm… ‘What many of us are hopeful of now, it seems, is being able to gain — or regain — a sense of allegiance with our chosen places…,’ [Introduction]” — Robert Sullivan, New York Times, December 3, 2006

“Raymond Chandler …once said: ‘Hammett is all right. I give him everything. There were a lot of things he could not do, but what he did, he did superbly.’ He added, in a summary that helps define Hammett’s achievement: ‘He was spare, frugal, hard-boiled, but he did over and over again what only the best writers can ever do at all. He wrote scenes that seemed never to have been written before.’ He also gave his characters a distinctive language and convincing motivations in a genre that had grown stereotyped, flaccid and uninvolving.”–Robert McCrum, The Guardian

A coolly glittering gem of detective fiction that has haunted three generations of readers, from one of the greatest mystery writers of all time.. A Vintage Books Special Edition features an introduction by James Ellroy. A treasure worth killing for. Sam Spade, a slightly shopworn private eye with his own solitary code of ethics. A perfumed grafter named Joel Cairo, a fat man name Gutman, and Brigid O’Shaughnessy, a beautiful and treacherous woman whose loyalties shift at the drop of a dime. These are the ingredients of Dashiell Hammett’s iconic, influential, and beloved The Maltese Falcon.

“Set in Chile in the early 1970s, [the book] traces the growth from innocence to experience of Mario Jimenez, a young postman whose sole duty is to deliver mail to [the poet] Pablo Neruda, the most famous citizen of Isla Negra, a tiny fishing hamlet. Neruda … bolsters Mario’s romantic involvement with beautiful Beatriz by teaching the postman the magical, metaphorical language of poetry…This imaginative, amusing and ultimately ominous story depicts the perennial and uneven struggle between raw power and poetry.— Publishers Weekly [Made into the movie Il Postino.] 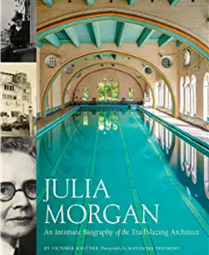 The book, which features gorgeous, full-color images of Morgan’s designs, also reveals much about her Paris education, her family life, her attitudes and her passions. By the end of Kastner’s book, Morgan feels close and dear. And we also understand how this prolific architect, who designed 700 buildings in her lifetime, could fade into obscurity after her death in 1957. Kastner’s book was 30 years in the making — it’s an exhaustive historic record that taps thousands of Morgan’s own letters (she saved everything), interviews with family and friends and Kastner’s own exposure to Morgan’s work. — Gina Gotsill, Bay City News Foundation

This new biography–featuring over 150 archival images and full-color photographs printed throughout–introduces Julia Morgan as both a pioneering architect and a captivating individual. Julia Morgan was a lifelong trailblazer. She was the first woman admitted to study architecture at the École des Beaux-Arts in Paris and the first licensed to practice architecture in California. Over the first half of the 20th century, she left an indelible mark on the American West. Of her remarkable 700 creations, the most iconic is Hearst Castle. Morgan spent thirty years constructing this opulent estate on the California coast for the newspaper magnate William Randolph Hearst–forging a lifelong friendship and creative partnership with him. Together, they built a spectacular and unequalled residence that once hosted the biggest stars of Hollywood’s golden age, and that now welcomes hundreds of thousands of visitors each year. This compelling biography draws on interviews, letters, and Morgan’s diaries, including never-before-seen reflections on faith, art, and her life experiences. Morgan’s friendship with Hearst, her passion for California’s landscape, her struggles with familial dementia, and her devotion to architecture reveal her to have been a singularly brilliant and determined artist.

“One of the more hidebound notions about American art is that modern art photography was strictly an East Coast phenomenon, and that Los Angeles represented a cultural backwater…[The author’s] groundbreaking study of…icons Edward Weston and Margrethe Mather, thoroughly debunks this falsehood. [The] exhaustively researched tome reveals how Weston’s work greatly matured during the 1920s in the semi-rural Tropico, now southern Glendale. …Warren saw Weston as a complex figure, with as many shortcomings as lasting creative triumphs. ’I admire his work tremendously,…but he could be duplicitous and manipulative. He was extremely ambitious and driven. He had to support a family, after all.’”— Kirk Silsbee, Los Angeles Times

This captivating biography reveals the previously untold love story of Edward Weston and Margrethe Mather. Both were photographic artists at the center of the bohemian cultural scene in Los Angeles during the 1910s and 1920s, yet Weston would become a major Modernist photographer while Mather, who Weston ultimately expunged from his journals, would fall into obscurity. The book reveals how they and their entourage sought out the limelight as the Hollywood film industry came of age. Based on ten years of research and illustrated with extraordinary images, some never published, this history has a captivating range of characters, including Charlie Chaplin, Imogen Cunningham, Max Eastman, Emma Goldman, Tina Modotti, Vaslav Nijinsky, and Carl Sandburg. The lively text brings to life the ambiance of this exciting time in Los Angeles history as well as its darker side. Artful Lives exceeds any previously published account of this key period in Weston’s development and reveals Mather’s important contribution to it, making it an essential reference in Weston studies. 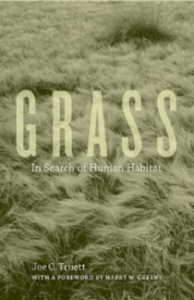 “[…The book] consists of twenty short essays, …which blend several narrative elements [including] the author[‘s]… own evolution in understanding the ecology of grasslands, and his journey of discovery from childhood… [H]e delves deep into the ecology of Western America, …revealing the enormous complexity of the interaction of humans with the Grass family that stretches far into our primal past … and how many ways we are still tethered to their ecology… I especially appreciated the thoughtful passages on ranching in the West–how utterly marginal it has always been, and how important it remains as an appropriate land use… The chapter about the black footed prairie dog was my favorite–…on this ubiquitous, seemingly abundant and yet very threatened creature…”. — Panayoti Kelaidis, Goodreads.com

Part autobiography, part philosophical rumination, this evocative conservation odyssey explores the deep affinities between humans and our original habitat: grasslands. In a richly drawn, anecdotally driven narrative, Joe C. Truett, a grasslands ecologist who writes with a flair for language, traces the evolutionary, historical, and cultural forces that have reshaped North American rangelands over the past two centuries. He introduces an intriguing cast of characters–wildlife and grasslands biologists, archaeologists, ranchers, and petroleum geologists–to illuminate a wide range of related topics: our love affair with turf and how it manifests in lawns and sports, the ecological and economic dimensions of ranching, the glory of cowboy culture, grasslands and restoration ecology, and more. His book ultimately provides the background against which we can envision a new paradigm for restoring rangeland ecosystems–and a new paradigm for envisioning a more sustainable future.

“…Le Guin is among the … most respected American writers who regularly set their narrative in the future to force a dialogue with the here and now… [The book] is a slow, rich read, …a liberal utopian vision, rendered far more complex … by a sense of human suffering. …The novel is about an imaginary people living in a far distant future on the Pacific coast. As a native of Berkeley, Calif., who lives in Portland, Ore., Mrs. Le Guin obviously knows her fictional territory. Moreover, if anyone is the world’s greatest authority on the Kesh, it’s the author, since she invented them. .”—Samuel R. Delany, New York Times