The art of cutting out symbols and figures onto folded pieces of paper stretches back to pre-Columbian times. Indigenous people, such as the Otomí of Central Mexico, made paper from the bark of fig and mulberry trees. This bark paper, called āmatl in Nahuatl or papel amate in Spanish, was decorated with cutouts. Using obsidian knives, healers and spiritual leaders skillfully carved out figures of deities, spirits, flora and fauna. The interplay between artist, paper, and symbol was powerful. The completed creation could, for instance, bring forth fruitful rains or cast out bad spirits. The Otomí people of Mexico today continue to master these ancient traditions of papermaking and paper cutting, even despite colonial attempts to eradicate them.

During the Spanish colonization of Mexico (16th–19th century), indigenous spiritual and cultural practices were targeted. The Spanish burned and destroyed the vast majority of pre-Columbian books. They also banned indigenous paper-making, forcing this tradition to go clandestine. Soon native āmatl was replaced with European paper, and later ultra-thin tissue known as “papel china” or Chinese paper was brought to Mexico via Spanish galleons transporting precious goods from other parts of the world. It was this imported Chinese paper mixed with native paper-cutting traditions that birthed the delicate and ephemeral Papel Picado we know today.

Aesthetically alluring, Papel Picado has fluttered its way across time and space into private and public places, brightening up the sky (or the ceiling) with festive spirit at cultural celebrations and special occasions. 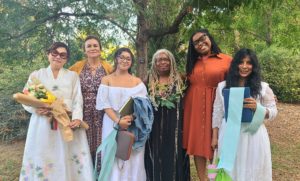 In the Garden of Quiet Reflection, Karina Puente’s large-scale colorful Papel Picado creations amplify our senses and enchant in timeless ways. Poetry is infused into Papel Picado banners to pay homage to the ancient tlamatine, or “the sage of the word.” As the highest art form in Aztec tradition, poetry was mostly oral and seen as divine incantation that moved through and emerged from the heart and mouth of the poet. Poems existed in the air. Like life, they were fleeting.

In Nahuatl, the term for poetry is in xochitl in cuicatl, which translates into “flor y canto” or “flower and song.” Poetry, inseparable from nature, is the transitory flower that blooms from the earth and the song that is sung to it. Whereas poets in Aztec tradition were typically male, Six Word Blooms celebrates local women of color poets. Each offers her own “flower and song” in six word counts, a poetic form chosen for its meditative appeal.

Six Word Blooms is an offering that honors ancient traditions and invites visitors to meditate and dream into the future with us. “When words are carved into Papel Picado, the power of the page becomes apparent,” states Puente. “I believe that we all have what it takes to create a story that comes true. Our stories- filled with wild dreams -are made true one page at a time. As the wind moves through the art, words and intention undulate and carry the story forward.”