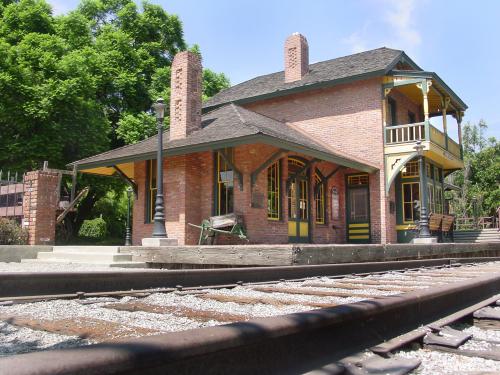 In 1970, an abandoned train station was moved from its original location a quarter mile north of The Arboretum and restored to look as it was first constructed by the Atchison, Topeka and Santa Fe Railroad in 1890. A typical half-passenger, half- freight depot with living quarters upstairs for the agent and family, the Santa Anita Depot was an active local station stop for both Baldwin Ranch and nearby Sierra Madre residents. Described in the local Sierra

Madre newspaper in August, 1890, as “an elaborate two-story depot built with one hundred thousand bricks from the nearby E.J. “Lucky” Baldwin brick yard”, the Santa Anita Depot cost an estimated $5,000 to construct.

The Depot could not be moved intact, but all the original bricks were removed from the station as well as salvageable doors, trim, beams and even the picturesque Depot balcony. Reference photographs were taken of the interior details, and within days the Santa Anita Depot was a stack of wood and brick in the south parking lot of The Arboretum. Reconstruction was completed in 1970 and fifty yards of Santa Fe standard gauge track was laid in front of the Depot by members of the Monrovia Model Railroad Club. The Santa Anita Depot of today has been refurnished with turn-of-the-century housewares and period railroad equipment to recreate the ambiance of the bustling station stop it once was. Guided tours of the Santa Anita Depot are temporarily unavailable due to construction.