The Arboretum Library has a Rare Book Room of about 500 volumes. The oldest book is an herbal from 1598. The Rare Book Room contains a variety of materials with exquisite botanical illustrations, historic botany and horticulture books from the 1500s to the 1800s, and unique items from the history of the Arboretum and Southern California gardening.

The plants portrayed in the images are native to Mediterranean Climate Areas and many of them can be found in the Arboretum. Please remember that the location of a plant sometimes changes. If you want to look at the complete source, you can see digitized copies on Internet Archive or click on the link beside each source.

Not all of the sources found here are the main sources. If you want to know the origin of the image, please visit Los Angeles County Arboretum & Botanic Garden Flickr-page

If you want to know more about the purpose and aim for this exhibition, visit About the project-page

Paxton’s Magazine of Botany and Register of Flowering Plants 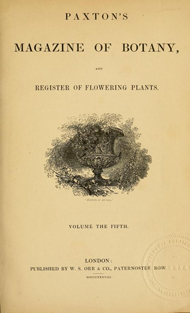 The hand-colored engravings and lithographs from Paxton’s Magazine of Botany and Register of Flowering Plants claim their honored place as highlights of Victorian botanical illustration. As the nineteenth century ushered in a profound era of plant hunting and gathering worldwide, newly discovered botanical specimens were brought to Europe for cultivation. Sir Joseph Paxton (1801- 1865) endeavored to include these fine discoveries as part of his floricultural monthly; The Magazine of Botany and Register of Flowering Plants, which also featured the favored British cultivars. Joseph Paxton was, at one time, superintendent of the gardens at Chatsworth House, owned by the Sixth Duke of Devonshire. In addition to horticulture, Sir Paxton’s talents extended to Victorian garden design and architecture, which was evidenced by the creation of the Crystal Palace for the Exposition of 1851. An immense iron and glass structure, the Crystal Palace was the unparalleled showcase of Victorian innovation and design, the inspiration for which was Paxton’s own Lily House at Chatsworth, where he displayed his prized Water Lilies. Paxton’s design and creation of the Crystal Palace was a monumental achievement, for which he was knighted.

The botanist’s repository : for new, and rare plants 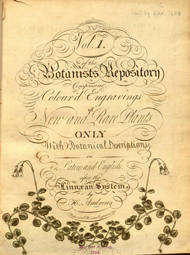 Larger in format than the rival publication of the time, Curtis’ Botanical Magazine, London, 1787 on, the Botanists’ Repository proved superior with new depictions of finely engraved plates which were produced entirely by the artist and author of the work, Andrews himself. As a footnote to the art of botanical illustration, it was extremely rare for the artist of a singular work to personally engrave, hand-color and document every single plate in a given publication. Although the Botanists’ Repository was not Andrews’ first botanical work, it was his noted monograph on heaths (Coloured Engravings of Heaths, London) began in 1794 and completed 1830, that Andrews illustrated his mastery as a flower painter, engraver and colorist. In these heretofore undocumented botanic specimens, more aesthetic than scientific, the large format plate allows for finer botanical accuracy, without forsaking the beauty of the composition. (Blunt. The Art of Botanical Illustration, London, 1950.)

Read the complete The botanist’s repository : for new, and rare plants in Internet Archive 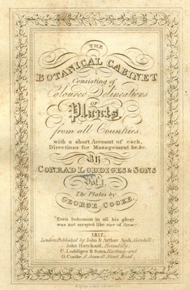 There are a few famous examples of seldom seen botanical periodicals. The orchid plates published in journals like Curtis’s Botanical Magazine and Edwards’s Botanical Register have been reprinted, but many others are known only from the originals locked away in libraries. A good example is Loddiges’ Botanical Cabinet, published in 20 volumes with 2000 plates between 1817 and 1833.

About the year 1790, Loddiges started to import living plants from other continents, especially from the United States of America. In 1776 his first son William was born, and in 1786 his second son George; both later joined the company. Therefore, Conrad changed the name of the company to Loddiges & Sons. When Conrad Loddiges died at the age of 87 years, on 13 March 1826, he still was not an English citizen, but he owned the best known and most famous company for the importation of exotic plants in Great Britain. Already in 1800 his nursery was the largest in Great Britain and also the most profitable. (Jenny, Rudolf, The Botanical Cabinet 2008)

Read the complete The Botanical Cabinet in Internet Archive 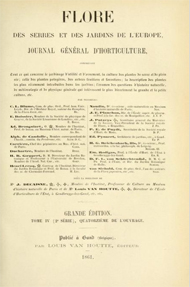 Flore des Serres et des Jardins de l’Europe (‘Flowers of the Greenhouses and Gardens of Europe’, 1845-1888) was one of the finest horticulture journals produced in Europe during the 19th century, spanning 23 volumes and over 2,000 colored plates with French, German, and English text. Founded by Louis van Houtte and edited together with Charles Antoine Lemaire and professor Scheidweiler, it was a showcase for lavish hand-finished engravings and lithographs depicting and describing botanical curiosities and treasures from around the world.

The work is remarkable for the level of color-printing craftsmanship displayed by the Belgian lithographers Severeyns, Stroobant, and De Pannemaker. Louis-Constantin Stroobant (1814-1872) printed many of the illustrations for the first 10 volumes. During his career, De Pannemaeker produced some 3,000 illustrations for botanical periodicals and books and was also a noted landscape painter. Most of the plants depicted in “Flore des Serres” were available for sale in van Houtte’s nursery, so in a sense the journal doubled as a catalogue.

The 19th century was an age of discovery and botanical periodicals were published all over Europe and America to document the beauty of newly found plants and to cater to the burgeoning interest in horticulture. The editors were experienced botanical engravers and horticulturists, combining their knowledge and skills to create a showpiece of novel exotics and familiar cultivated plants. Louis van Houtte, owner of the most successful nursery on the Continent at that time, sent his own plant explorers to find unknown orchids and other exotics, and to return them to Ghent for cultivation at his nursery, and later publication in his “Flore des Serres”. (Flore des Serres et des Jardins de l’Europe, Wikipedia)

If you have any questions about the Rare Book Collections of The Arboretum Library, please don’t hesitate to ask librarian Susan Eubank.