​ Perennials - The Arboretum
Become a Member!

What defines a perennial?

Perennial Plant: A perennial plant, or simply “perennial,” is a plant that lives for more than two years. The name is derived from the Latin words per (“through”) and annus (“year.”)

Euphorbia rigida is commonly known as gopher spurge or upright myrtle spurge. It is native to the Mediterranean Basin, the Middle East and South Africa, where it is considered a weed. The common name “spurge” derives from the Middle English and Old French spurge – “to purge” – due to the use of the plant’s sap as a purgative. 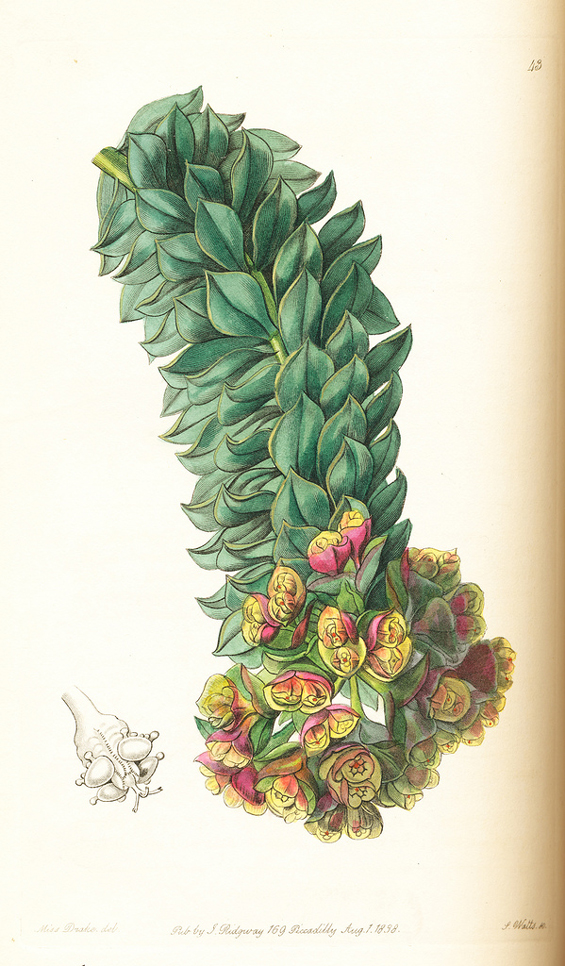 Euphorbus is the Greek physician of King Juba II of Numidia (52–50 BC – 23 AD), who married the daughter of Anthony and Cleopatra. He wrote that one of the cactus-like euphorbias was a powerful laxative. In 12 BC, Juba named this plant after his physician Euphorbus. Botanist and taxonomist Carl Linnaeus assigned the name Euphorbia to the entire genus in the physician’s honor.

This plant belongs to a genus of plants belonging to the family Euphorbiaceae. Consisting of about 2,000 species, Euphorbia is one of the most diverse genera in the plant kingdom. The genus is primarily found in the tropical and subtropical regions of Africa and the Americas, but also in temperate zones worldwide. Succulent species originate mostly from Africa, the Americas, and Madagascar. The plants are annual or perennial herbs, woody shrubs or trees with a caustic, poisonous, milky sap. The roots are fine or thick and fleshy or tuberous. Many species are more or less succulent, thorny or unarmed. The main stem, as well as the side arms of the succulent species, are thick and fleshy. The deciduous leaves are opposite, alternate or in whorls. In succulent species the leaves are mostly small and short-lived. 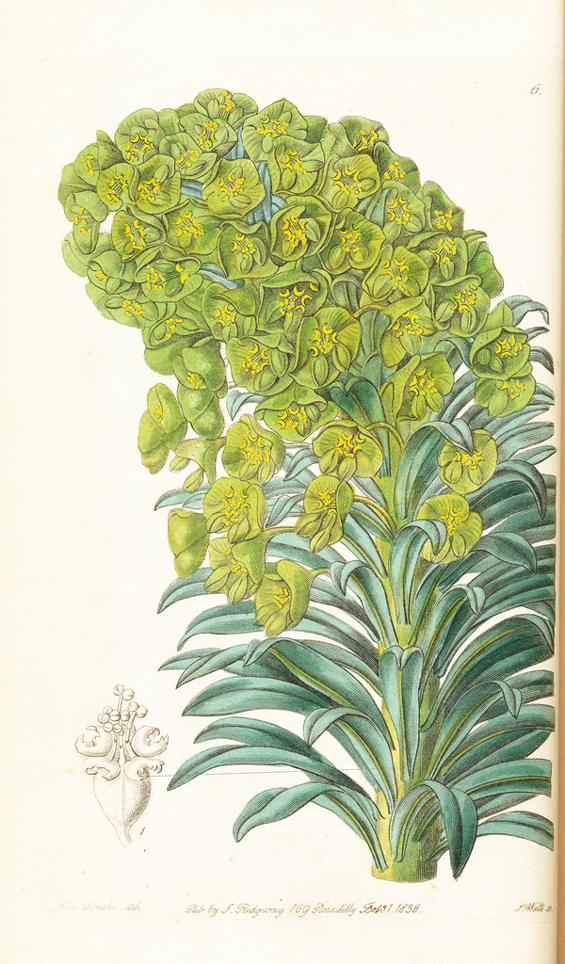 The milky sap of spurges, called latex, evolved as a deterrent to herbivores. It is usually white and colorless when dry. The pressurized sap seeps from the slightest wound and congeals after a few minutes in air. In contact with mucous membranes of the eyes, nose and mouth, the latex can produce extremely painful inflammation. Therefore, spurges should be handled with caution and kept away from children and pets. Latex on skin should be washed off immediately and thoroughly.

Anigozanthos flavidus is a member of the Haemodoraceae, occurring in the open forests of south-western Australia. Commonly it is referred to as tall kangaroo paw or evergreen kangaroo paw. The name may arise from the Greek word anisos meaning unequal and anthos, a flower, referring to the shape of the flower. 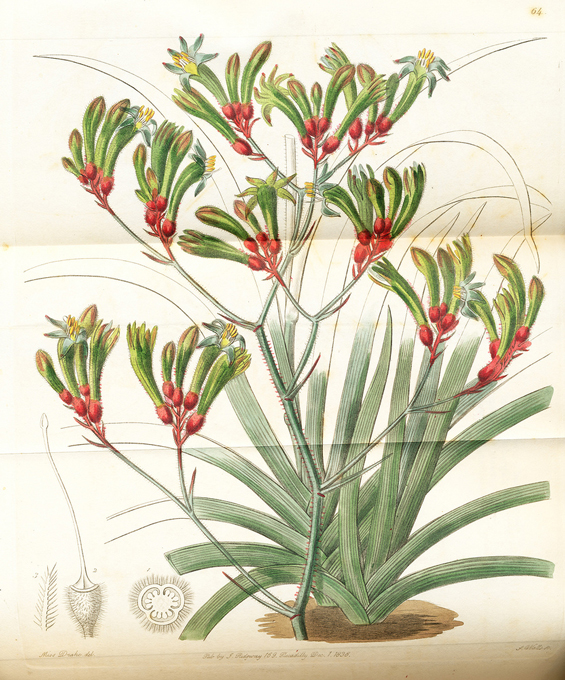 The kangaroo paws comprise a small group of 11 species in the genus Anigozanthos and a single species in the genus Macropidia. They are perennial herbs consisting of strap-like leaves arising from underground rhizomes. Flowers occur in clusters on stalks, which emerge from the bases of the leaves. A number of species die back to the rhizome in summer, regenerating in autumn. 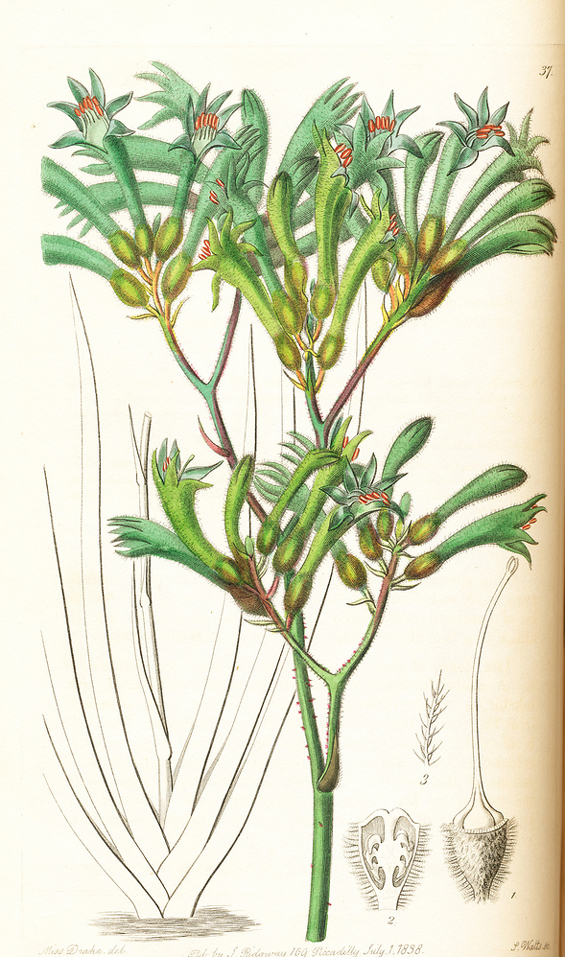 Anigozanthos flavidus is the most widely cultivated member of the kangaroo paws, as it has proven to be hardy in many climatic zones, even those with humid summers, which often do not suit plants from the west. In comparison with other kangaroo paws, A. flavidus is probably the least attractive species. The typical color of the flowers is a pale greenish-yellow, which is not particularly appealing. However, the combination of hardiness and bird attraction has made the plant popular in cultivation. Owing to its vigor, A. flavidus has been the basis of considerable hybridization work involving the other, more colorful species, which have proven difficult to maintain in cultivation.  A. flavidus can be grown from seeds without any pretreatment. The species can also be propagated by dividing the clumps after flowering. This is the best way to propagate desirable color forms. Hybrid kangaroo paws are propagated commercially by tissue culture.

Epilobium canum, known as zauschneria or California fuchsia, is a species of willow herb and a member of Onagraceae, the evening primrose family. Native to dry slopes and chaparral of western North America, especially California, it is a perennial plant notable for the profusion of bright scarlet flowers in late summer and autumn. Other common names are hummingbird flower and hummingbird trumpet. 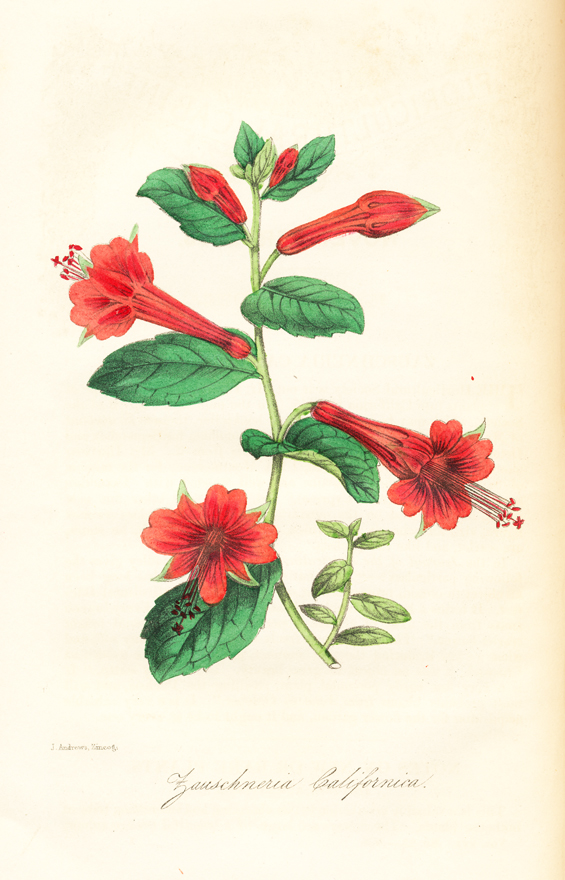 The original genus name was in honor of Johann Baptista Josef Zauschner (1737–1799), a professor of medicine and botany in Prague. The genus name Epilobium canum comes from three Greek words: epi (“upon”), lobos (“pod” or “capsule”), as the flower and capsule appear together, and canum meaning “ash-colored”, “gray”, “hoary.”

California fuchsia is slender-stemmed and multi-branched with toothed, green, lanceolate to ovate leaves that are densely covered with fine, short hairs. The lower leaves are generally opposite, the upper mostly alternate. The flowers are scarlet, tubular to funnel shaped with a basal bulge, and with four two-cleft petals, borne on short auxiliary stems. California fuchsia grows at elevations to 10,000 ft. in dry areas, rocky slopes, and cliffs.