​ Shrubs and trees - The Arboretum
Become a Member!

What defines a tree or a shrub?

Tree: A tree is a perennial woody plant. It most often has many secondary branches supported clear of the ground on a single main stem or trunk with clear apical dominance. A minimum height specification and height at maturity are sometimes cited as part of the definition of a tree at maturity.

Shrub: Woody plants that do not meet the definition of a tree by having multiple stems and/or are small in size are usually called shrubs.

Ribes speciosum is a very common and beautiful shrub that is native to California. It is found in shaded canyons and woodlands up to 1500 ft. and in coastal sage scrub and chaparral, ranging from northern Baja to Santa Clara County. It is a member of the currant family, Grossulariaceae, which contains only one genus of about 200 species. 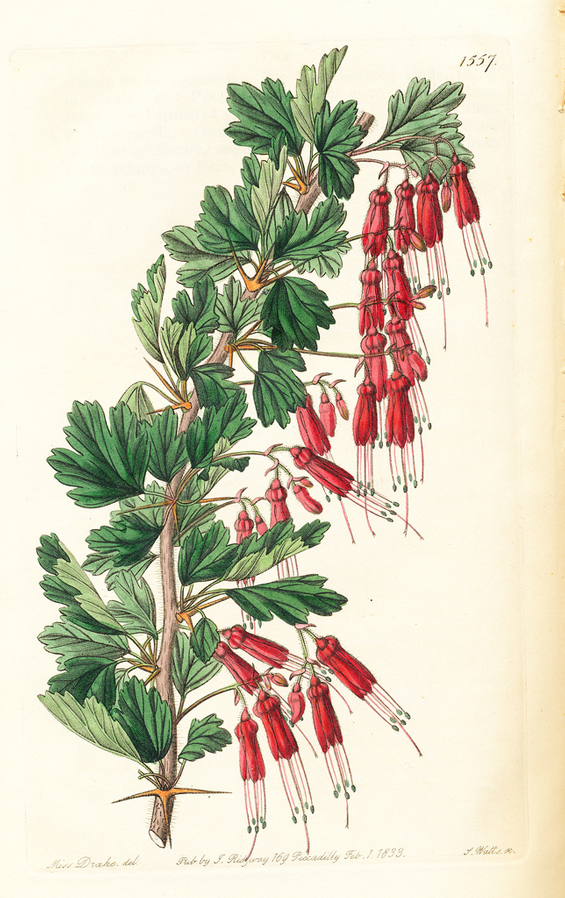 Currants and gooseberries were classified as two separate genera, but the plants are so similar that both are now included in a single genus, Ribes, from an Arabic word that means acidic. It is very easy to tell the difference between a gooseberry and a currant; gooseberries have prickly or armed stems, and currants are smooth-stemmed. All members of the currant family are shrubs that bear mostly edible berries. The garden gooseberry, Ribes uva-crispa, and the cultivated currant, Ribes nigra, have been grown for centuries. Many species of Ribes grow in our local mountains.

The fuschia-flowered gooseberry is one of Southern California’s showiest natives, hence the species name speciosum. Fuchsia-flowered gooseberry bears an armor of thorns along its branches and the fruits are strikingly spiky. The spiny, arching branches are covered in inch-long, dangling, cherry-red blossoms from January through May, making it a superb hummingbird plant.

Melaleuca fulgens, commonly known as the scarlet honey myrtle, is a shrub or small tree of the myrtle family (Myrtaceae) endemic to Western Australia. 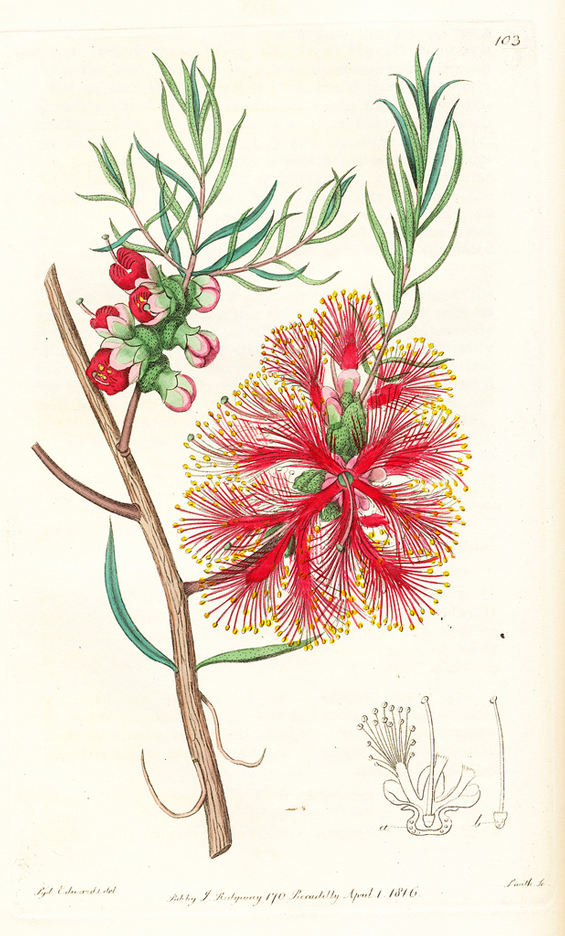 The myrtle family is a family of dicotyledonous plants. Clove, guava, feijoa, allspice and eucalyptus belong in this family where the species are woody, contain essential oils and have flower parts in multiples of four or five. One notable character of the family is that the phloem is located on both sides of the xylem, not just outside as in most other plants.

Melaleuca is a genus of around 170 species. However, there are many unnamed and incorrectly named species and the true number is probably well in excess of 200.  The botanical name for the genus means black and white and presumably refers to the blackened lower bark and white upper bark of some species, resulting from fire.  Melaleucas are commonly known as paperbarks  in the tree forms and  honey myrtles  in the smaller forms.

Melaleuca is closely related to Callistemon (bottlebrushes), and differs from that genus in the way that the stamens are connected to the floral tube. The stamens are generally free in Callistemon but united into bundles in Melaleuca.

The scarlet honey myrtle is notable for its showy orange, red or purple flowers. It was one of the many species first described by the botanist Robert Brown, appearing in literature in 1812. The species name is the Latin adjective fulgens, meaning bright, and refers to the showy flowers.

This shrub has narrow leaves 0.75 to 1 inch long, and both leaves and branches give an aromatic fragrance when bruised. Native birds, particularly Australian Honeyeaters searching for nectar, are attracted to the shrub when it is in flower.  In California, the flowers are very attractive to hummingbirds.