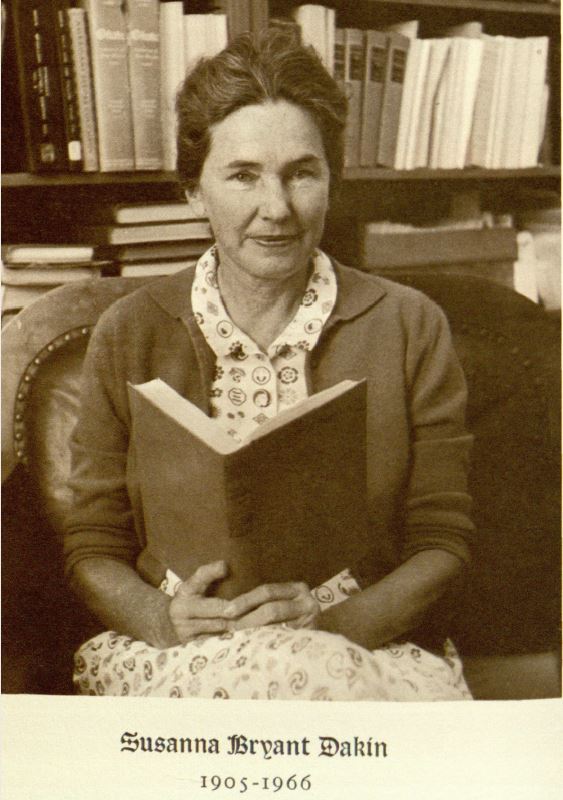 In celebration of Women’s History Month in Marcy, we honored Susanna Bryant Dakin (1905-1966), one of the original members of the California Arboretum Foundation Inc., which created the Los Angeles Arboretum in 1947.  Recognizing the enduring historical importance of the Queen Anne Cottage, she led the drive to restore the grand house built by Elias J. “Lucky” Baldwin on his ranch in 1886. In the late 1880s, the Cottage on Baldwin Lake was one of the showpieces of Southern California.

The dwelling had been vacant since Baldwin’s death in 1909 and was in extreme decline. After his death, the doors, stained glass windows, floor tiles in the entrance hall and marble facing for the fireplaces had been removed by his family, crated, and stored in the nearby Coach Barn. Below is a photo of the Queen Anne Cottage on Baldwin Lake in 1887. 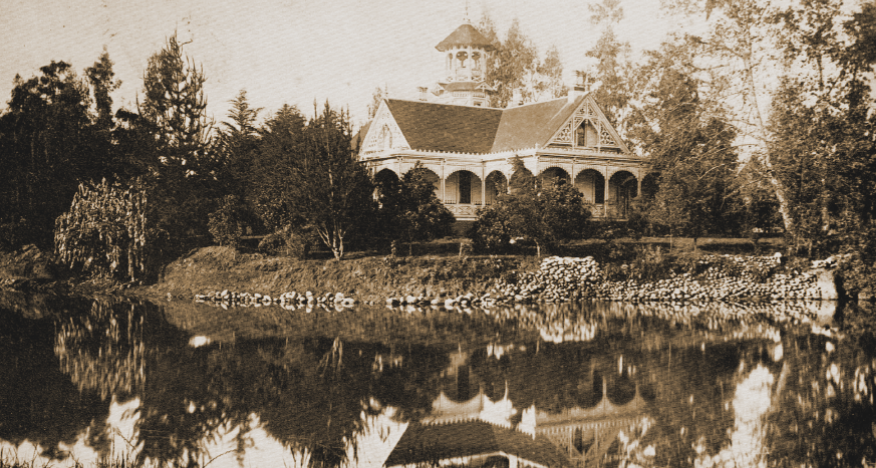 In 1949, at the urging of Mrs. Dakin, an historian and author of several books including A Scotch Paisano: Hugo Reid’s Life in California, 1832-1852, a Historical Committee was established to plan the restoration, raise funds, and oversee the cottage project.  As chairman, she recruited an all-star committee roster of historians, planners, designers, and other interested citizens–each selected for his or her special knowledge and willingness to assist in the project.

The committee raised and spent more than $60,000 to restore and refurnish the original Cottage, some $15,000 more than Baldwin had spent for the original construction. No detail was too small. The upper walls and ceilings of the rooms had retained enough of their original paint to make an accurate interior restoration possible. Original color schemes for each room were determined from the stained-glass windows. (Later the interior was repainted in pastel tones, which are not historically accurate.) Below the Cottage in disrepair. 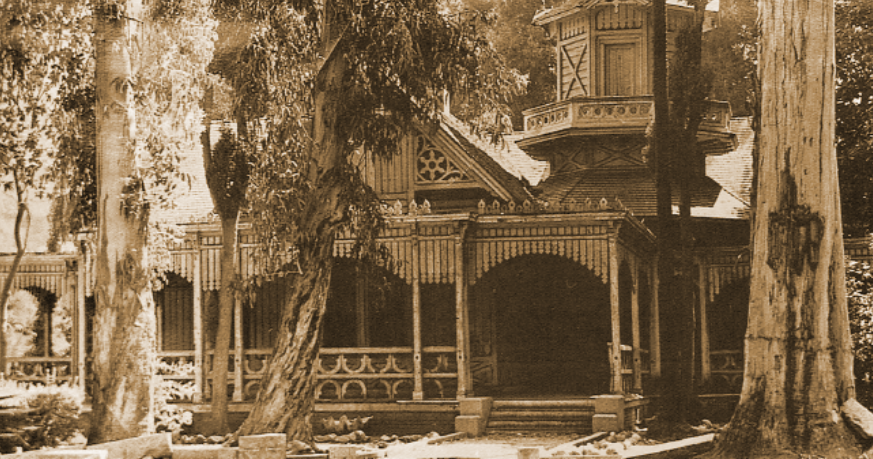 The pattern for refitting the entry encaustic tiles proved a challenge worthy of a jig-saw puzzle. During the initial phase of the cottage restoration, the cement pads on which the tiles were originally laid had been removed and sent to the dump. Then someone realized the there was a pattern in the discarded cement. A search party raced to the dump and recovered a full quarter section and from this the tile pattern was pieced together perfectly.

On the afternoon of May 18, 1954, Samuel Ayres Jr., who originated the idea to create the Arboretum, presided over dedication ceremonies of the restored Cottage. State Historian Aubrey Neasham dedicated the cottage as California Historical Landmark #367. Mrs. Dakin and other distinguished guests assembled outside the gleaming red and white cottage.

The exceptional way the Queen Anne Collage was restored led to the decision by the State to undertake the restoration of the Coach Barn and Hugo Reid Adobe (as it was then known). Mrs. Dakin helped to secure favorable action on a bill to provide funds to restore the Barn and Adobe. In 1980, the Cottage and Barn were added to the National Register of Historic Places.

Mrs. Dakin’s interest in history extended far beyond the Arboretum and reflected her family’s longstanding commitment to California.  Mrs. Dakin was a fellow of the California History Society and a founding sponsor of the Friends of the Library organization. She also was involved in the Friends of the Bancroft Library, the Society of Asian Art, the American Field Service, Scripps College, and Marin Country Day School. Her mother Susanna Bixby Bryant founded Rancho Santa Ana Botanic Garden, now known as the California Botanic Garden, in 1927 to preserve California native flora.

Mrs. Dakin was killed in a 1966 plane crash in Mexico. In memoriam to her, F. Harold Roach, president of the California Arboretum Foundation, wrote, “For the Arboretum and the California Arboretum Foundation, her passing leaves a void, which can never be restored. Susanna Bryant Dakin was one of the prime movers in the drive to preserve the historic Lucky Baldwin estate and to develop it as an Arboretum…While her interests and concerns were wide, extending into many fields, one felt as though the Arboretum was ever in her thoughts. We have lost a great patron of the arts, a respected historian, and a great humanitarian.”

We celebrate Susanna Bryant Dakin’s preservation of our Historic Core. She is forever in our hearts at the Arboretum.