The group uses the Shared Inquiry™ method developed by the Great Books Foundation.  The discussion is greatly enhanced if the chosen book of the month is read.

New participants are always welcome!  Click here to see the questions already asked for this year’s past books and check out the history of the book club by hovering on the tab and see all the previous years and books to explore.

COVID-19 Response: This group has decided to move the Community Book Discussion to Zoom for the immediate future. Please be sure to RSVP to Susan.Eubank@Arboretum.org if you would like to participate in a specific meeting.  You will be sent the Zoom link for that meeting.

For more information and to be added to the e-mail reminder list about the Community Book Discussion Group, please contact, Arboretum Librarian, Susan Eubank, at 626-821-3213 or Susan.Eubank@Arboretum.org.  Please be sure to RSVP to Susan if you plan to attend. 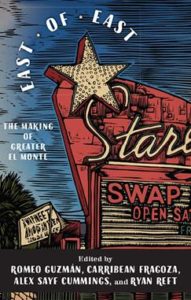 “.The editors of [the book] see deeper truths. Greater El Monte, it turns out, is the setting for a story as rich and tangled as the flora that still covers the Whittier Narrows Recreation Area, a patch of parkland that lies, relatively unspoiled, in the watershed the El Montes call home. East of East is a crowd-sourced history of the community, with essays by 31 contributors, many of whom draw from the archive of oral histories, photographs, and documents assembled by the activists of the South El Monte Arts Posse.” — Héctor Tobar, Los Angeles Review of Books

East of East: The Making of Greater El Monte, is an edited collection of thirty-one essays that trace the experience of a California community over three centuries, from eighteenth-century Spanish colonization to twenty-first century globalization. Employing traditional historical scholarship, oral history, creative nonfiction and original art, the book provides a radical new history of El Monte and South El Monte, showing how interdisciplinary and community-engaged scholarship can break new ground in public history. East of East tells stories that have been excluded from dominant historical narratives–stories that long survived only in the popular memory of residents, as well as narratives that have been almost completely buried and all but forgotten. Its cast of characters includes white vigilantes, Mexican anarchists, Japanese farmers, labor organizers, civil rights pioneers, and punk rockers, as well as the ordinary and unnamed youth who generated a vibrant local culture at dances and dive bars. 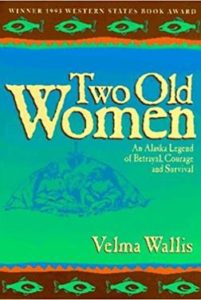 “In a straightforward and engaging manner…Wallis retells the traditional Athabascan legend of a nomadic tribe, caught in a brutally harsh winter, that can no longer care for a pair of old women who have become somewhat of a burden to them. Faced with imminent starvation, the tribe decides to leave the women,…behind. Once the old women have recovered from the initial shock of being abandoned, they begin an unexpectedly spirited battle against the cruelest of elements…Rediscovering the skills they learned in their youth, the women defy their death sentence…The conclusion affirms the importance of community, respect, and mutual contribution.”  Vanessa Holford , VCU Scholar Compass

An Athabascan Indian of Alaska’s Yukon flats, author Velma Wallis retells a classic legend wherein two old women are abandoned by their tribe during a brutal winter famine and must survive on their own or die trying. A wise and simple story now in paperback. Winner of a 1993 Western State Book Award. 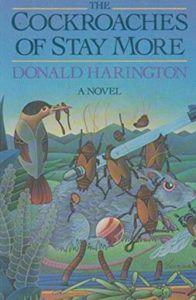 “Harington dips into allegory, and almost dispenses with any human characters, by describing the run-down later days of his town. The animals who inherit its ruins, and worship Man, tell the present-day tale… Their foibles and personal epiphanies bring to the reader a sense of the timeless nature of love, longing, and passion. This sensitive and unconventional story was dedicated to Harington’s grown daughters and stepson, and became a bedtime tale that he never told — nor that anyone would expect. And yet, like the best children’s tales, it can disturb the sensibilities of adults much more. Doom, for the roaches, is rung out in a deep bell that’s almost beyond their power of hearing — as other bells of truth, about the transience of love, may be for human readers..”— Steve Reed, Monadnock Review

“Harington turns to the insect world of his Ozark town of Stay More. The cockroach community perambulate on gitalongs and apprehend their environment through sniffwhips. Maidens dance to the scents and sounds of the bewitching Purple Symphony of early evening. The faithful attend prayer meetings – the exalted Lord is Man, of the Holy House, (so called because when He’s drunk He shoots holes in the walls with His guns). Meet our hero Squire Sam Ingledew, an intrepid fighter, philosopher, and leader, afflicted by deafness – and by acute bashfulness in the presence of females. Meet the lovely Letitia Dingletoon, who lives with her Maw, Paw, and forty-two siblings in an old log, and is in a fair way of losing her virginity. The cast of characters is rounded out with a few mammals, and mythological critters too. There is cliff-hanging action, there is merrymaking. So come visit, and stay more in this fanciful irreverent underworld.”–BOOK JACKET. 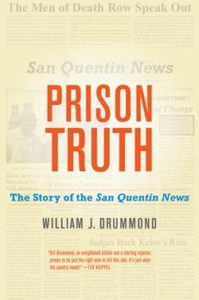 “Drummond’s book is about the recent rebirth of … a newspaper written, edited, and published by inmates at San Quentin prison. This newspaper delivered something the world has for too long suppressed: humanizing stories of prisoners, told by prisoners…News has great influence over public opinion; who creates the news affects where that influence takes us as a society. …For anyone concerned with the prison reform movement, it is critical to engage with the media portrayals of inmates. And for that, Prison Truth is an essential book.”— Robin Kaiser-Schatzlein Los Angeles Review of Books

San Quentin State Prison, California’s oldest prison and the nation’s largest, is notorious for once holding America’s most dangerous prisoners. But in 2008, the Bastille-by-the-Bay became a beacon for rehabilitation through the prisoner-run newspaper the San Quentin News. Prison Truth tells the story of how prisoners, many serving life terms, transformed the prison climate from what Johnny Cash called a living hell to an environment that fostered positive change in inmates’ lives. Award-winning journalist William J. Drummond takes us behind bars, introducing us to Arnulfo García, the visionary prisoner who led the revival of the newspaper. Drummond describes how the San Quentin News, after a twenty-year shutdown, was recalled to life under an enlightened warden and the small group of local retired newspaper veterans serving as advisers, which Drummond joined in 2012. Sharing how officials cautiously and often unwittingly allowed the newspaper to tell the stories of the incarcerated, Prison Truth illustrates the power of prison media to humanize the experiences of people inside penitentiary walls and to forge alliances with social justice networks seeking reform.

“…She was: attentive to the present, dominated by the conscience of her deeds and of the course that history takes, incapable of refusing the claims of those who suffer from hunger or thirst for justice and love… It would almost be impossible to distinguish between art and life or to say if there is more authentic poetry in her verses than in her acts. Everything she did, said, and wrote was in some way saturated with that poetic air, revealing the marvelous, if somewhat delicate balance between the ‘is’ and the ‘should be.’” — Margot Arce de Vazquez, Gabriela Mistral: The Poet and Her Work

“The work of the first Latin American to win the Nobel Prize in literature is translated with fine sensitivity. Each poem reflects the contained and tragically luminous spirit of this unique Chilean woman.”– Publishers Weekly